A vast complex of wetlands spread over 150,000 ha, the Camargue presents itself as a mosaic of very diverse environments around the Rhône delta. Large areas are also devoted to agriculture (rice, other cereals, etc.). They are never very far from large and shallow water bodies that serve as sheds or nesting areas for many waterbirds. In this regard, the Camargue is identified as a region of major ornithological importance for many groups (Flamingos, Ardeidae, Anatidae, Laro-limicoles, paludicole passerines in particular ...) in Southern Europe and even for all the western part of the Mediterranean Basin.

On the other hand, its geographical location away from the main traditional European migration routes of Common Cranes makes the occurrences of this species exceptional in the 20th century despite particularly favorable Camargue environments. The first known winter records date from December 1999 (67 individuals). They were consolidated with a few hundred Cranes who stayed all winter from 2004. The workforce then continued to grow steadily to reach around 10,000 during the winter of 2015-16. 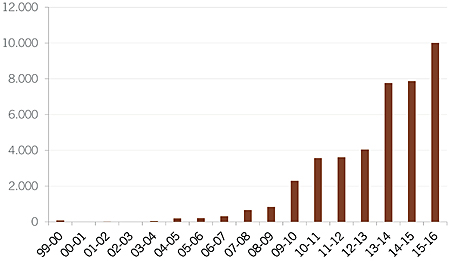 In the fall, field observations show that the migratory flows converging towards the Camargue come from two major directions, the east and the north. 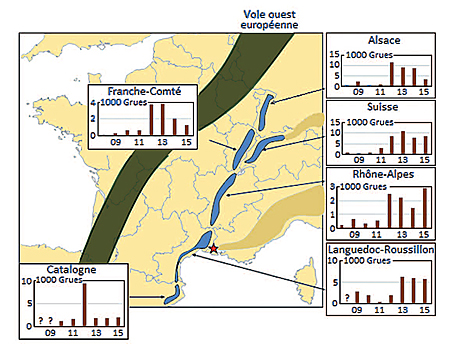 Postnuptial migration of Common Cranes in the east, the south of France and neighboring regions since 2008 (blue). Ocher zones: arrival corridors for Cranes from the Central European route.