Diepholz Moorniederung - Click to hide or display the table

The Diepholz Moorniederung is situated in the south-west of the state of Lower Saxony, between the towns of Bremen, Hanover and Osnabrück. The natural area covers some 1,180 square kilometres, including 240 sq kms of marshland and peat bogs

The Diepholz Moorniederung (DHM) with its large peat bogs and wetlands is an attractive resting area for tens of thousands of Common Cranes during the autumn migration but also in spring on their way back to their nesting grounds.
The first large groups of cranes can be seen in early October. The peak is reached during the last decade of October and the first of November with a record count of 104,000 birds. Up to 10,000 cranes may even stay in this area until December, depending upon the weather conditions.
This environment of open wet moors provides the birds with optimal conditions to spend the night.Restoration works of this habitat which was partly destroyed by peat mining have been carried out for more than 30 years. They include the construction of dams to stabilize the water level and clearing the area from trees to keep the landscape open.
These measures benefit the cranes which are more and more numerous to stop there during their migration as the places where they rest and spend the night have been optimised. 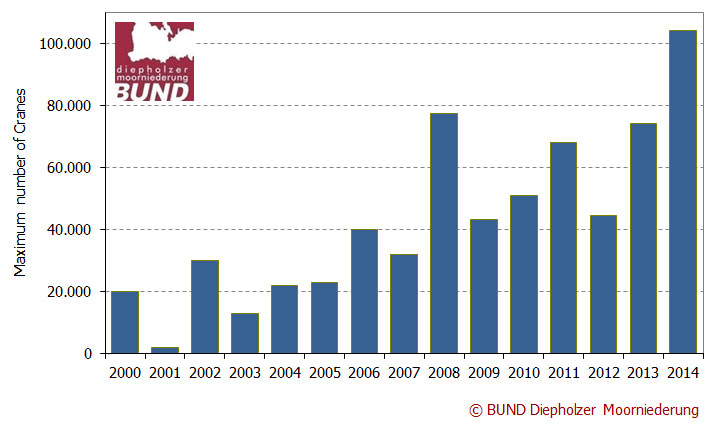 The planning and the conduct of the restoration works are carried out by the Diepholzer Morniederung BUND (Bund für Umwelt und Naturschutz Deutschland = Federal Association for the Protection of the Nature and of the Environment. It is financed by the state of Lower Saxony, the Diepholz and Nienburg districts and also by foundations and other means of support.

The Federal Association for the Protection of the Nature and of the Environment of the the Diepholz Morniederung has been working for 30 years for the restoration and the protection of the wetlands. Its activities mainly consist in planning and carrying out restoration measures and assessing their effects, inventorying fauna and flora and educating people to the environment.
The Diephholz Morniederung BUND and its volunteers have been regularly carrying out a census work of the cranes on the reserve for many years. The data are gathered, analysed and made available for the visitors.
When the cranes are present , you can get a complete information on them and know the results of the counts , day after day.
If you get there, you can visit the BUND DHM in the European Centre Specialized in Wetlands and Climate (EFMK) and obtain more information from one of the BUND DHM employees.
During the last years, on the BUND DHM’s initiative, installations were created to facilitate the observation of the cranes, e.g. tall observation towers in Neustadt and Rehden’s marshes which give the opportunity to watch the cranes as they fly back to their resting place in the evening.and a platform at Ucht which allows the visitors to watch cranes in very good conditions.
During the day time, when the cranes feed in the arable lands it is possible to use our mobile observation platform (for more details : www.bund-dhm.de)