The large Sotonera reservoir west of Huesca was put into service in 1963. During spring migration, thanks to its strategic position, it is used as a last stop for cranes before crossing the Pyrenees mountains between mid-February and mid-March.

Numbers accumulate when bad weather with strong winds and heavy rainfall prevent birds from crossing the mountains and up to 40,000 or even 80,000 birds have been counted on those occasions.

The most spectacular moments to observe cranes are in the morning when the weather is fine and large groups soar to cross the Pyrenees, disappearing behind the sierras near Riglos.

During winter (November – February) 1,000 to 2,000 cranes, wintering in the Sotonera, feed in the surrounding area.

In Montmesa the village just North of the reservoir, a small information centre has been set up (www.grullasmontmesa.es). 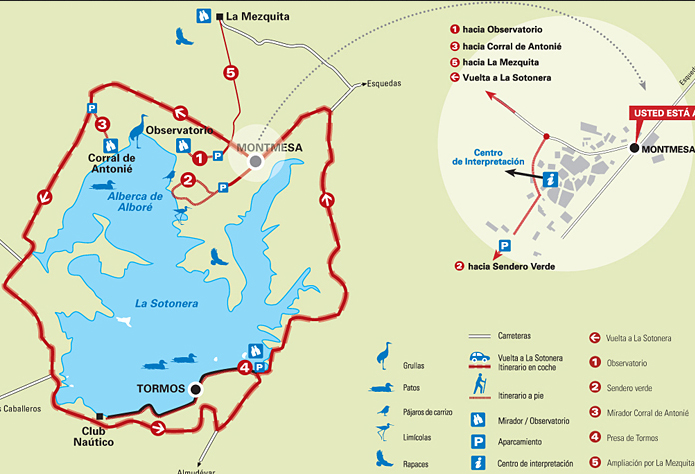 To get at the best places to watch cranes take the track that goes West from Montmesa.
After 300 m. you will cross a small bridge and the track divides into three.
On the left (item 1) you go to the Observatory (600 m, good for photographers), on the right (item 5) you go to La Mezquita where the largest numbers can be seen when they take off and straight ahead it will lead you to some old farm buildings named "Corral de Antonié". For the Corral de Antonié (item 3) turn left at the next junction and left again after 200 m. This spot gives you good views over an older reservoir called Alberca de Alboré, which is now part of the Sotonera reservoir and traditionally the most important resting place for cranes. When Alberca de Alboré is filled, groups of cranes gather on the island close to Montmesa.

The site is protected as an Important Bird Area (IBA), the responsible organisation for this being the Aragón Government, but no management plan exists. Farmers are compensated with European subsidies for damage cranes may produce when feeding.

Since 1980 regular counts are carried out by the Huesca Bird Society called Grupo Ornitológico Oscense (GOO) and published on their website www.avesdehuesca.es.